I feel like a broken record saying this, but for those of you just joining us or if you missed the memo.. we are in the middle of switching our office and guest bedroom around. Mr. LMB is a genius and he came up with the idea to bring our office upstairs next to our master bedroom & move the guest bedroom downstairs to have it’s own “suite” as some would say. We both say we just wish he would have come up with the idea before we moved in, but now we just laugh after carrying the heaviest pieces of furniture up and down stairs while switching the rooms. The guest bedroom is a very small room with a few issues. One: the drop tile ceiling which isn’t our favorite & we will be re-doing very soon so stay tuned for that! & two: The size & placement of furniture  in this small room. I decided to place the bed under the window which isn’t had at all & I actually kind of like it. We have considered getting a smaller bed, but staying with the one we got is just fine too. The one thing I wanted on this wall was a focal point. My first thought was art, but then I thought, what about some dramatic lighting that I can’t have on the ceiling because of the low drop tile ceiling, but instead put it on the walls. Done. Here is a big step in our guest bedroom makeover… 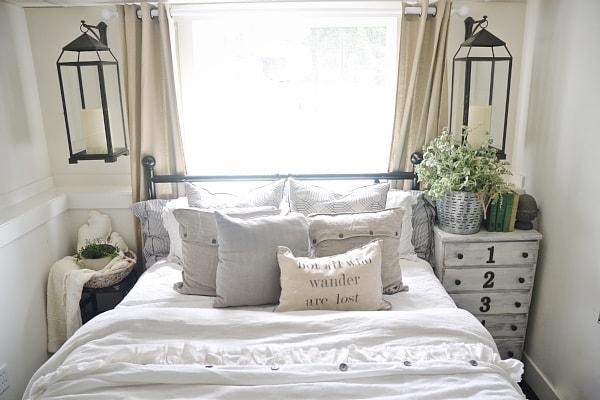 Enter these lovely lanterns from Pottery Barn. Kind of a little story about these guys.. The day we found out we lost our 6th baby we actually set out to have “the best day ever” we went all over and had an amazing day filled with shopping, massages, eating, lots of laughs, & just fun. We went into Pottery Barn because Pottery Barn is therapy & I saw these lanterns & my deep emotional thoughts started coming. I was actually possibly pregnant with twins, but the first one stopped developing sooner & looking at the lanterns I thought of our babies who we had just lost & how they were tiny lights in our lives even though they were here on earth for such a short time. & I just couldn’t leave the store without them. I wanted the lanterns in our house no matter where we were putting them. Kind of a strange thing how we put memories or feelings with objects, but that day I had so many emotions so that is what you do I guess.

When we got them home I originally wanted the in the master bedroom, but that didn’t work & then I remembered our awkward and very un-finished guest bedroom.. winner! I wanted them on each side of the bed on the sides of the window, but there were a few issues there. The window is not in the center of the room, & we needed to figure out how to hang drapes over that awesome ledge [I honestly wish the ledge wasn’t there because it just collects dust & it takes away from the room, but we are working with it & we can figure out how to make it cool! Anyways so our idea was to hang the lights center on each side of the window so that they were both centered on their side of the window [measuring from window to corner of wall on each side]. 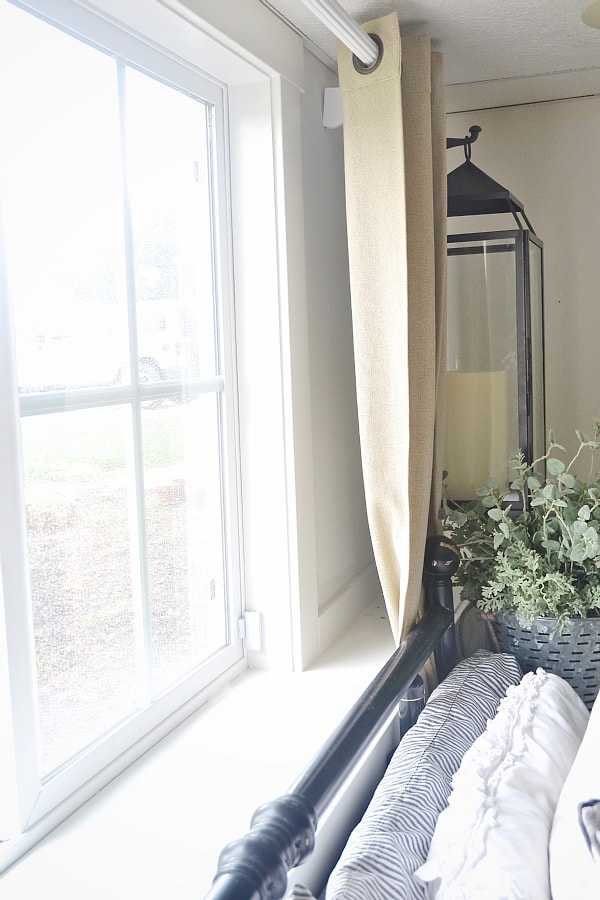 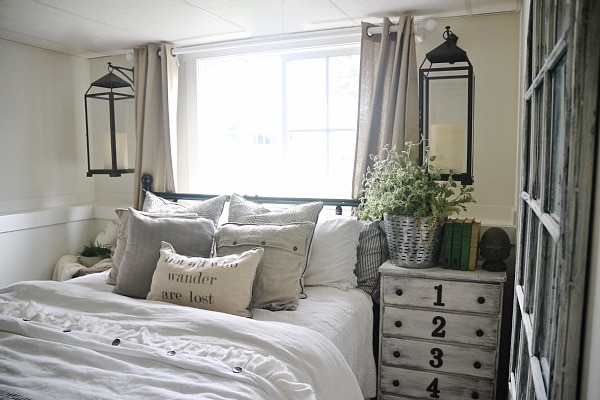 We then hung curtains we found at World Market using an extender curtain rod that hangs the rod further away from the wall. We needed this so the curtains would not pool on the ledge while trying to disguise the fact that the window wasn’t centered by having a little more curtain to one side of the bed that had the larger gap from window to wall. Make sense? Because I feel like that doesn’t. Hopefully the pictures explain it better than me. The lanterns were super easy to hang. We used hooks that we found at Pottery Barn as well. The candles are also from Pottery Barn & they are real wax battery powered candles that you may be asking why I didn’t show them on, well that would require batteries & on all my trips there that’s the one thing I always forget so to that I say.. soon I will show you these puppies on & shining in this tiny little room. 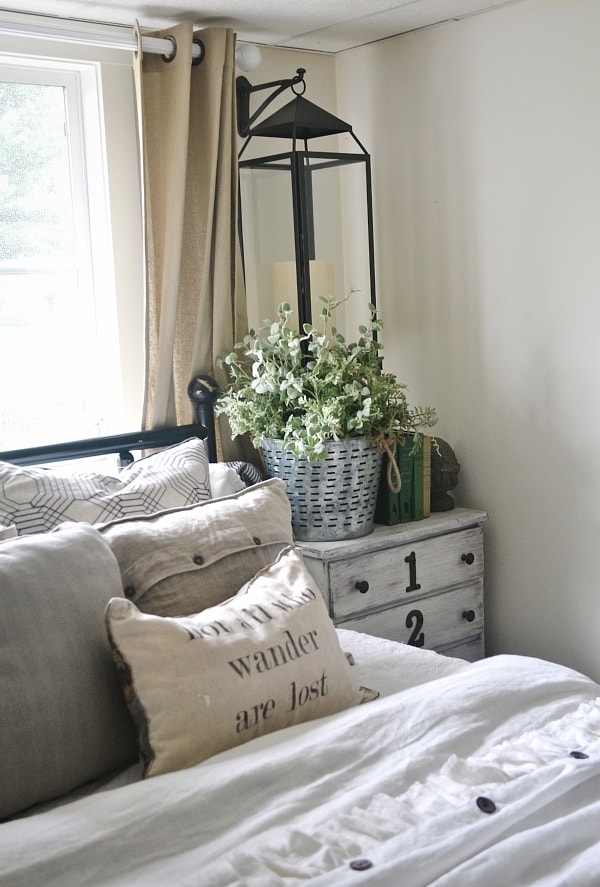 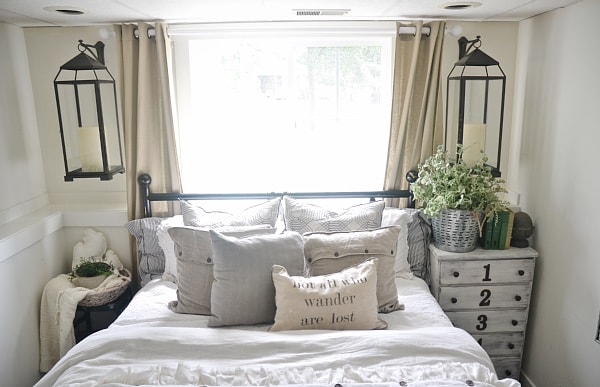 The guest bedroom is coming along great. A few more construction things to do, & some decorating, & then a reveal! I love that we created this focal point & got the curtain situation figured out. Let me know what you think in the comments below, find me on Facebook, & chat with me on Instagram. 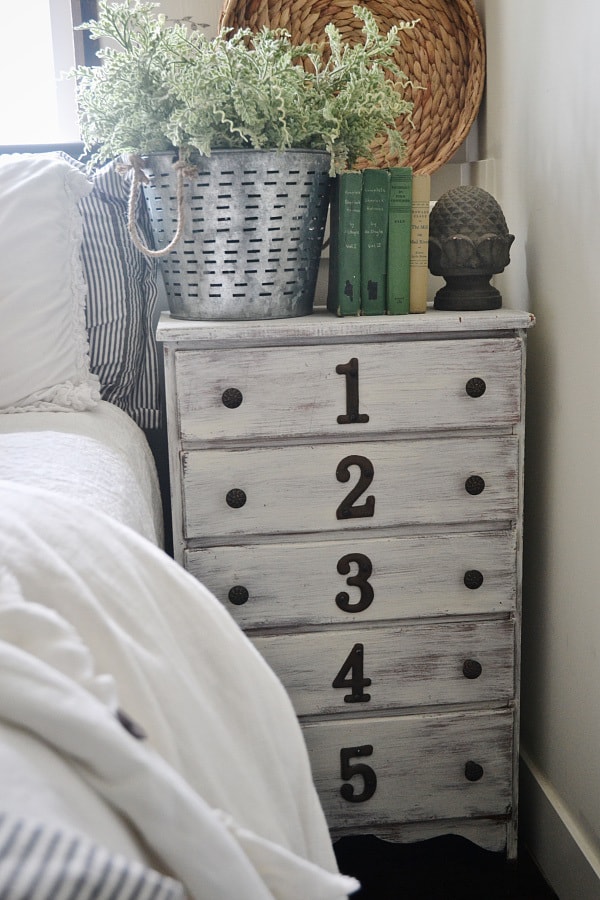 Hi! I am Liz Marie AKA Liz Marie Blog. I’m a twenty something year old living with my veteran husband on our farm in west Michigan. After spending almost a decade living in North Carolina as Jose served his country & I studied interior design, we are happy to be back in the mitten state working on our fixer upper farmhouse & beginning our journey of farm life. read more…